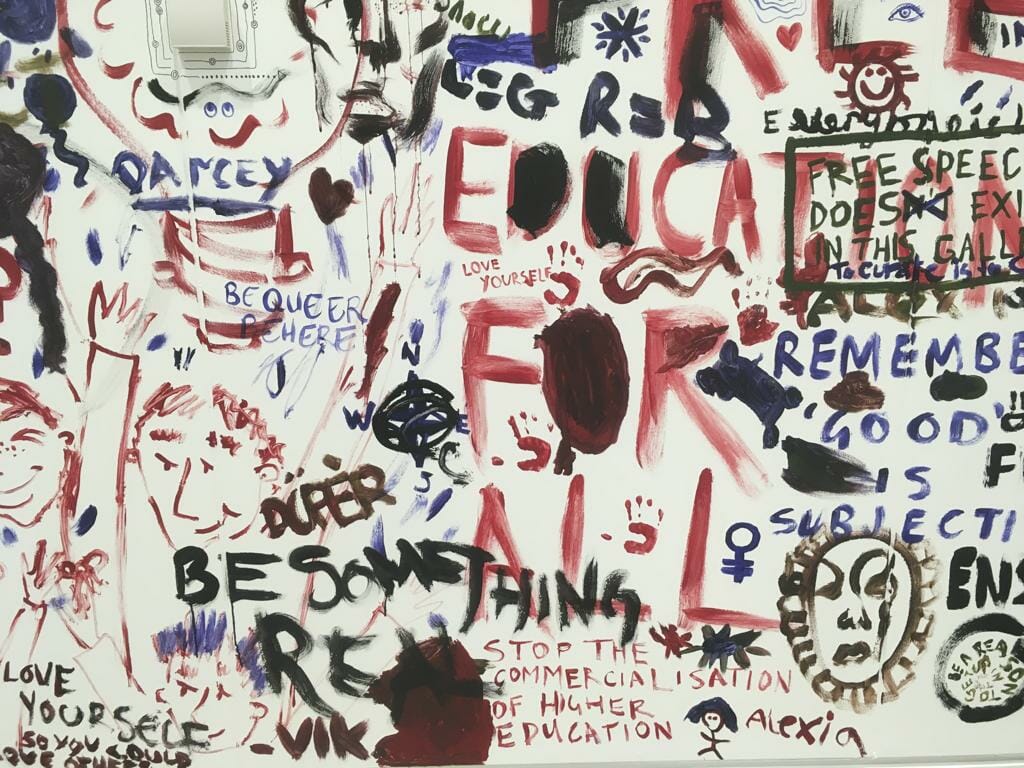 Yoko Ono – cutting through the noise.

You may have heard that Yoko Ono has an exhibition on at Leeds Arts University. A selection of her interactive installations, which have been shown internationally since 1966.

I went along and it was pretty great! Here’s why.

The exhibition invites attendees to get involved, being comprised of various interactive elements. Although, no pressure if you’re shy! There’s plenty to take in either way. She’s created a safe space for people to share their thoughts, feelings, wishes and in some cases, seriously heart-wrenching experiences, through a series of connected, interactive spaces.

As with anything of this ilk, there was a big old diverse mix of sentiments, ranging from lighthearted, positive and even comical, to emotive, heartfelt, deep and downright dark. I feel like this kind of art performs as a real social barometer.

In the immortal words of every Love Island contestant, ever: “Where’s your head at?”

Real indoor trees, a stack of pencils and labels, and the invitation to make a wish. What would you wish for?

For some people, it’s the simple pleasures in life, “I wish I had a nice dog” – we feel you, babe. Or my personal favourite, “I wish my willpower was a strong as my thighs” – a great wish that puts me in mind of that James Bond film… with the scene in the sauna… you know the one. Whilst others were a lot more serious and revealed the wisher’s genuine vulnerability, “my parent’s weren’t poorly”.

It’s interesting with activities like this, to see how much people are really willing to reveal about themselves. Although it’s anonymous, many people are still uncomfortable with sharing. Or losing face. If I’m completely honest, I am one of those people. There were many comical outtakes from the wish trees. It seems apt when you think about how people often use humour as a defence or coping mechanism. 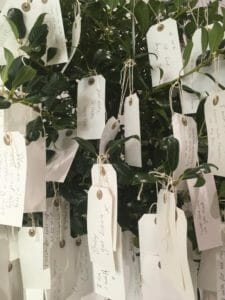 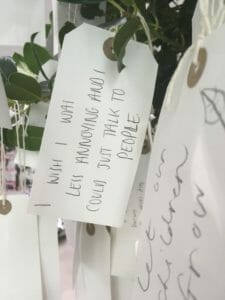 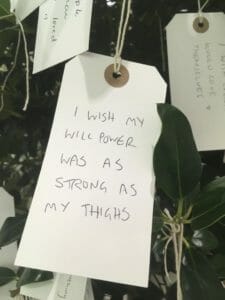 The next and probably most imposing installation piece is the “Add Colour Painting”. Here, people are invited to do just that – add colour. And the form this took was overwhelmingly text based.

The result – a visual palimpsest of timely and relevant musings, that felt like your social media news feed regurgitated all over the wall… depending on what bubble you live in. We’re talking #MeToo, feminism, sex positivity, gender politics, identity politics, world politics, human rights, animal rights – and of course, some more generalist points of view such as “LOVE SIRACHA”.

It was all at once witty, thought provoking and unnerving. I was instantly engaged and the longer I stood there, the more I was pulled in – definitely a shower AND a grower. 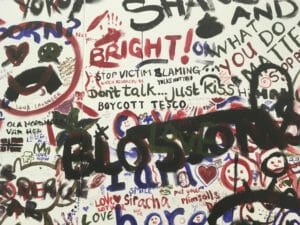 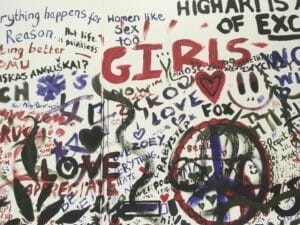 Behind a partition in the room, audio could be heard. It played what sounded like a jarring soundtrack of – definitely female – voices, calling out in anguish and distress. As you turned the corner, this was brought into context. A screen at the end showed visuals, roaming over inanimate female body shaped objects, piled together in what looked like a post-apocalyptic environment – the audio presumably revealing something about their origin. In front of the screen in the middle of the floor, was lots of clothing, piled up in an untidy mound.

The wall displayed responses to an open call from Yoko Ono, for people (mostly women) to share their experiences of sexual harassment. I was very much in line with the #MeToo campaign. As a society, it has been too easy to dismiss an individual’s story – and in many cases stories – breeding a culture of victim blaming and mistrust. But I’d challenge anyone to stand in front of this wall, read this continuously growing collection of stories, and feel that same dismissiveness. 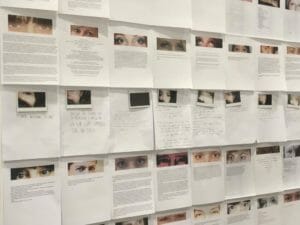 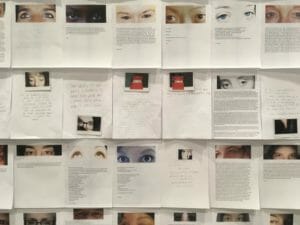 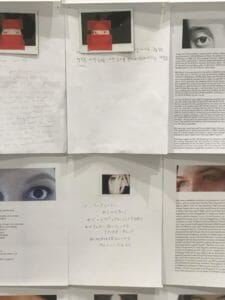 As a whole, this exhibition is a bit of an emotional rollercoaster and definitely worth a visit while it’s in Leeds. There was also a lot more to it than I have briefly synopsised in this blog. It was interesting to see so much of what we scroll through on social media, so succinctly housed in one compact space. And – as on social media – with so many unaligned and unassigned voices contributing.

It’s on until 14th March. Go check it out and see what cuts through the noise for you.