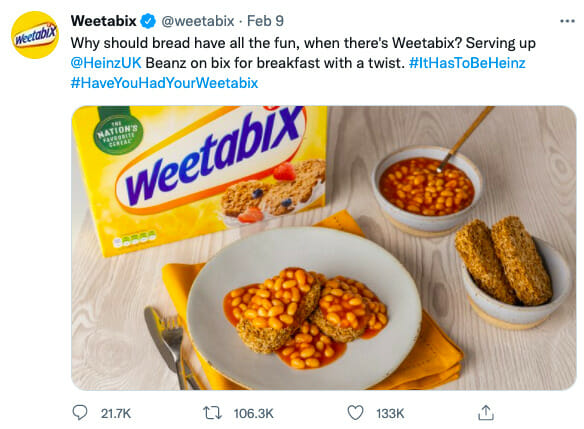 It’s a word that featured in absolutely no one’s vocabulary as of just a few months ago.

But unfortunately for the Oxford English Dictionary (and the English language in general), it’s one that’s started to be whispered in marketing circles.

If this is the first you’ve ever heard of it, I apologise, but please prepare to momentarily squirm as I explain it to you.

A horrendous portmanteau of ‘brand’ and ‘banter’, it describes the ‘cheeky’ and ‘edgy’ way brands interact with each other over social media platforms – all commenting on each other’s posts and ribbing each other’s marketing campaigns.

The word might be new, but what it describes is not, as it’s no secret that social media is currently a sea of brantering brands, and for many, it’s helped fast track them to thousands if not millions of followers.

All in good fun and (usually) no harm done.

But after several high profile ‘spats’ already in 2021, it seems like branter is becoming bigger than ever.

And when brands aren’t actively engaging in it, they’re trying to engineer it, searching for the holy grail that is viral branter.

So is it a viable form of content that’s here to stay? Or is it the latest trend that’ll soon be a nay?

Here are 5 things we’ve noticed during the first six months of non-stop branter! 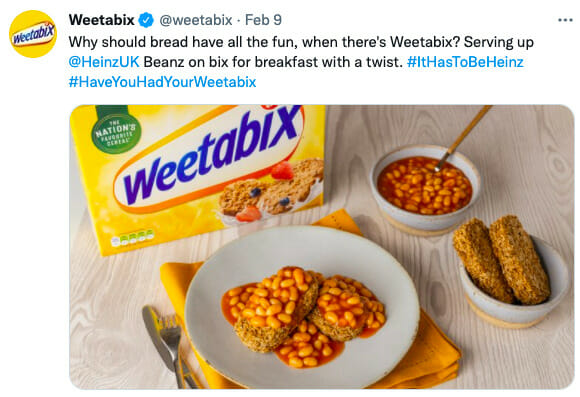 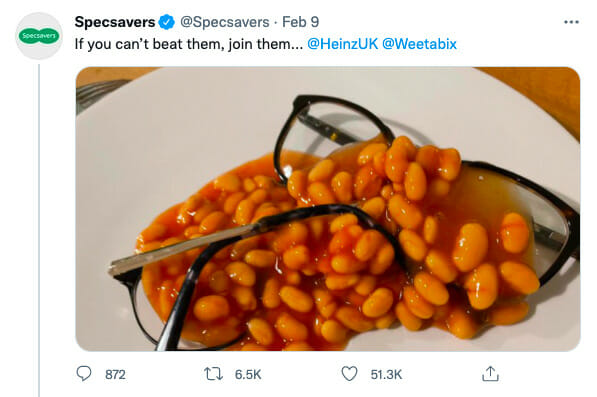 1. Is Branter Making Us Blander?

We all know that forging a unique personality and distinct tone of voice is paramount to a brand’s success, especially on social media.

Ever since Innocent smoothies first paved the way with their random and whimsical style, all brands have sought to fashion their own social media ‘character’, one their target audience can relate to and engage with.

Bullish, excitable, laidback, sophisticated – There are hundreds of avenues to go down…

But as snarky jibes and memespeak become more commonplace, is there a risk that branter could be making us all sound the same?

A great example of this can be seen in the responses to a now infamous Twitter post from Weetabix in February, in which they suggested that followers try putting beans on their cereal.

The post was successful in provoking widespread attention for Weetabix, and brands quickly saw an opportunity to ride on their coattails.

Much branter did inevitably ensue, but when comparing the responses, I spotted something interesting:

Yorkshire Tea and Tesco both did comic dialogues: 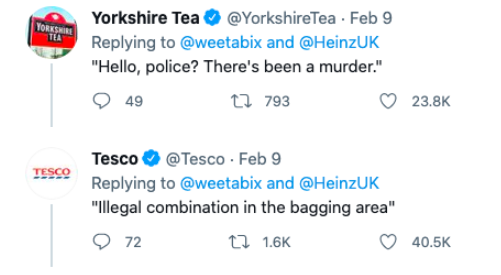 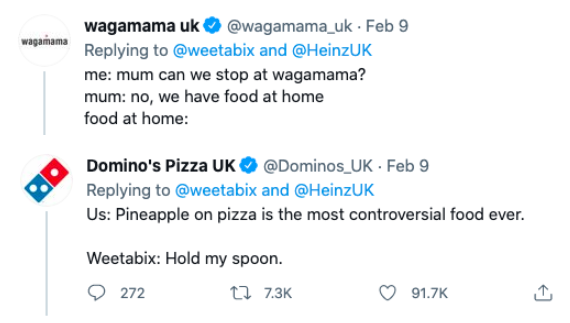 And most just resorted to wordplay or puns:

While most of these responses were undeniably funny, it’s clear that many of them come from a similar copybook.

You might think so what? It’s all a bit of fun.

But if your branter could have been written by anyone else, shouldn’t it come as a warning that your TOV isn’t distinct enough?

Here’s the issue: If brands continue to reap success from isolated moments of branter in the short term, they may be inclined to adopt this style more in the long term.

And if the above is anything to go by, brands risk becoming ‘blands’ – holding a mirror up to current internet discourse and all posting in kind.

So if you’re going to branter, be sure to do it your way!

2. Losing Your Voice & Missing The Mark

Viral branter is often too good to pass up, and many brands and organisations will completely neglect their usual persona for a bit of guaranteed engagement.

But while the rewards might seem worth the risk, suddenly adopting branter can be just as alienating as it is enticing…

For example, we’d all expect other food brands to get involved in the Weetabix debacle, but some of the other replies that day were a little more surprising:

While these posts from the likes of NHS and West Yorkshire Police were met with positive reaction… they also caused just as much backlash.

Should the NHS have been joking about beans during a national health crisis?

Many weren’t so sure:

Just one month after Weetabix-gate, another sparring of brands managed to capture the imagination of the public.

Marks & Spencers vs. Aldi… or more accurately Colin vs. Cuthbert.

Colin the Caterpillar is a much-loved chocolate cake in the UK and one of M&S’s most championed own-brand products.

So when Aldi released their Cuthbert the Caterpillar cake… M&S contacted their lawyers.

Most brands would have responded accordingly in the event of being sued, but Aldi decided to go the other way, using their cocky and witty TOV to full effect on social: 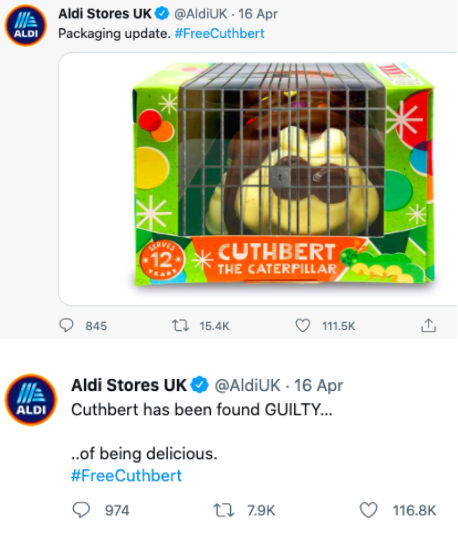 In just a few hours, #FreeCuthbert was trending, and Aldi let rip with a series of tweets mocking their situation… but mostly just mocking M&S.

Through those few tweets, Aldi went from being potential copyright-infringers to plucky underdogs, with most of the nation sat in their corner. Through pure banter alone, they’d masked a lazy bit of product design and fought off a harmful news story.

So how did M&S respond? How did they try and turn the tide against Aldi’s attacks?

… Well, with even more branter of course!

Despite having a fairly run of the mill and sober TOV on socials, M&S initially responded to the chaos by posting what was quite possibly their first-ever meme: 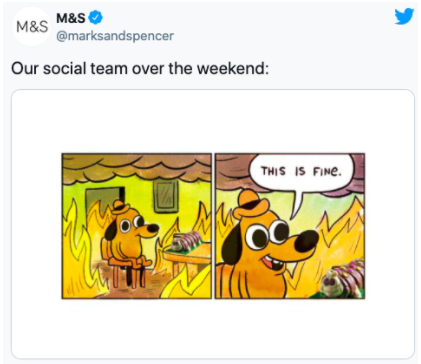 And in response to Aldi, they fired back a friendly little jibe:

Unfortunately for M&S though, these responses were mostly met with disappointment and embarrassment, as not only were they not as funny or entertaining as Aldi, but they also went totally against the M&S playbook. 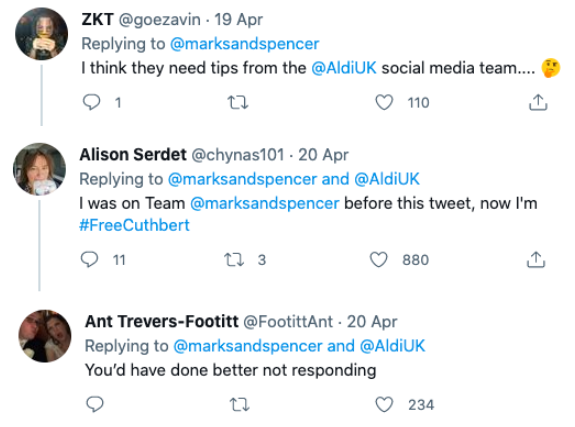 They felt wrong, they fell flat and Aldi won the social media war.

Branter just wasn’t a part of M&S’s TOV and in attempting to do battle, they had no hope.

Lesson learned they didn’t post again for a whole month…

And since quietly making their return, their Twitter feed is now an unrecognisable string of reactionary GIF and meme content: 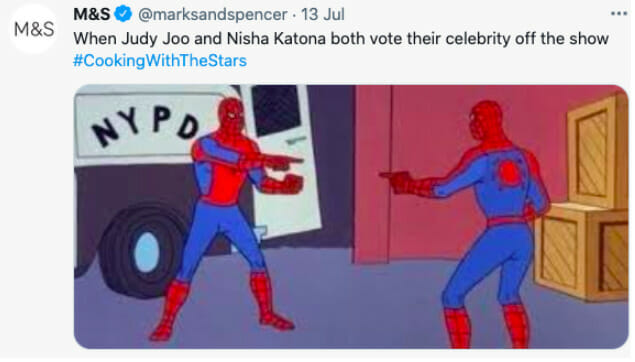 I guess if you can’t beat them, join them…

While Weetabix might have been the first to reap the rewards of branter this year… they weren’t the first to try it.

Love it or hate it, Marmite’s marketing always goes down a storm in the UK and their recent OOH campaigns for Marmite Dynamite were no different: 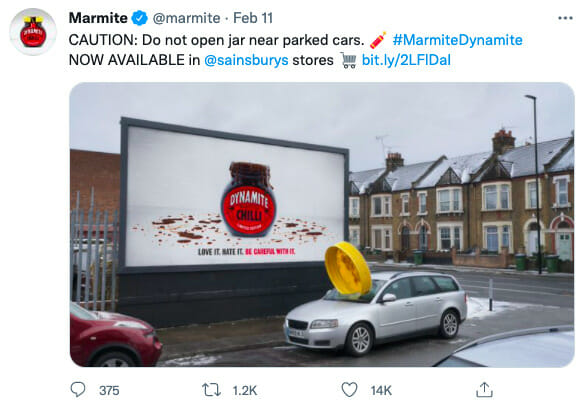 However, their subsequent post-brantering was not as successful. 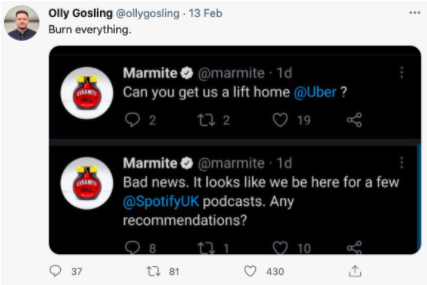 These were just two of over a dozen tweets Marmite sent out to other brands and very few received an actual branterous response.

When obviously staged or orchestrated, branter like this looks inorganic and needy, and it saw Marmite attract ridicule rather than attention.

The campaign didn’t need it and the people didn’t want it, highlighting why branter should never be a big part of your content strategy.

It can’t be planned for… It can only be hoped for.

4. Why Certain ‘Branter’ May Not Deliver Long Term

As the trend of incessant branter has swept across social media, cynics and high-level marketers have begun to question whether it has any long-term value for a brand’s image and growth.

In the short term, we know it can put your brand’s name in the spotlight and give everyone a big laugh – akin to the 15-minute fame of a reality star.

But what happens if brands begin to adopt branter speak into their persona more often? Or it simply just becomes part of their tone of voice?

As part of a specific study on ‘Brand-on-Brand banter’ this year, professors from Kent State University researched how people react to these tongue-in-cheek sparring wars.

And the results make interesting reading.

In the study, participants were asked to read tweets from fictional and real companies engaging in branter, and then state how likely they would be to interact with those brands.

In a nutshell, the researchers concluded that people were less likely to follow or even just engage with brands that instigated or attacked another brand with banter.

The analysis also revealed that those who used high-aggression humour tactics were seen as suspicious and manipulating by subjects and those that used friendly ‘low aggression’ humour were much more preferable.

So while Aldi might be riding high now… could there be a limit to their cheekier tactics?

5. Finding Your Voice & Hitting The Mark

So far, everything you’ve read has seemed quite anti-branter, but believe it or not, I’m actually all for it!

It’s clear that picking your moments is essential for certain brands, but if you keep within the rules and laws of your own TOV, there’s nothing to say you can’t get involved.

In explanation, I refer back to the Weetabix branterthon…

Within the replies, it’s easy to spot the brands who’ve stayed true to their character, as their responses completely stand out from everyone else’s:

Such as Innocent’s sweet faux-horror…

There’s also something to be said for branter that’s self-mocking or turns the attention back on your own brand, with these two being my personal favourite responses: 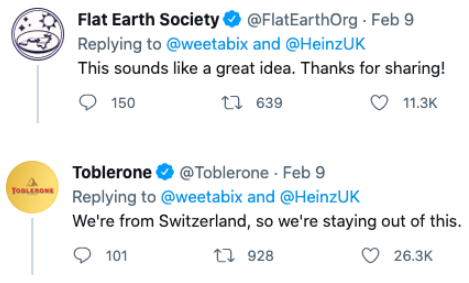 Because hey, a bit of self-deprecation never hurt anyone right?

In conclusion, it’s important to note that despite these not even being the funniest replies, these tweets all still brought in huge engagement, as the audiences can see and recognise the characters the well-established brand characters.

And while branterous meme speak might be winning the battle for now, a well-established TOV will always win the war!