Supporting a brand as they grab the horns and storm into one of the UK’s largest supermarkets!

This month we had the privilege of supporting a brand, as they launched their product into one of the biggest supermarkets in the UK (the third largest in the UK to be exact) and we wanted to make sure they didn’t go in quietly!

Soda Folk are a Colorado-born, all-natural soda brand, bringing the delights of authentic American Root Beer, Cream Soda, Orange Soda & Cherry Soda to the UK. Already stocked in burger joints, restaurants and bars – nationally, they’ve impressed the public and grabbed themselves a spot in a national supermarket – Sainsbury’s. Because of this, we wanted to create a pretty incredible social impact, so it was time to start planning and making sure the social launch was as big as the launch itself.

The need to tease…

Of course, on the day of the launch, we could take to social media and announce their arrival, which would hopefully reach a load of people, however, the public would be none the wiser (prior to this) and none the better off after this either. We (the public) love the tease, the anticipation, the build up. Why do we get so excited for Christmas every year? Because we know the next day we’re going to receive some gifts and eat a LOT of good food. Imagine going to bed one night and waking up the next day to a pile of gifts – of course, you’d be thrilled, but this excitement would soon be over and done with BUT, because we know Christmas is approaching, we start getting excited weeks (ok… months) before. It’s this anticipation that grabs us, and it’s important a similar feeling is created when wanting to raise awareness and excitement regarding any new situation for a brand.

Ideally, you want as many people excited about the launch as possible, because you want people to talk about it. Social media can kick start the initial conversation but word of mouth can spread this even faster, so if you cause a bit of a stir on social media, it’s bound to start a conversation between friends, competitors and other brands – which is what we want! So don’t hide in the shadows, get out there and do something bold! 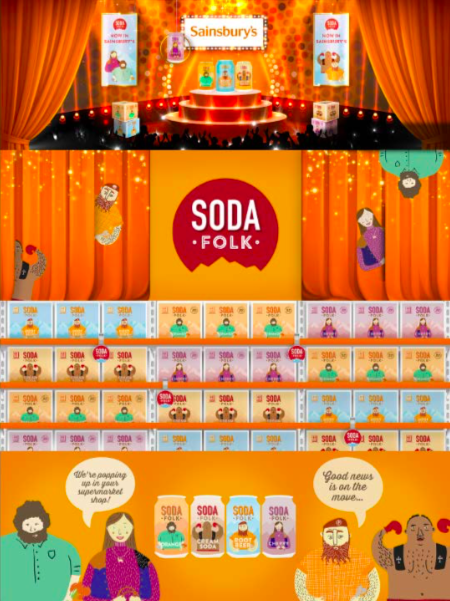 Our designers got to work on a nine-grid takeover on Instagram – impactful, clever and aesthetically pleasing. Each square interlocks to the next, whilst drip-feeding a story onto social channels and building up the anticipation for the next post. Once the public notices that the one post they have seen is not a stand-alone piece of content, they are more likely to click through to the feed to see what all the fuss is about, and sure enough, a couple more posts are there waiting to reveal more of the story.

It was important to incorporate Soda Folk’s brand personality into the design and copy, although we needed to think of the launch itself and it’s key messaging, it was essential that this kept to Soda Folk’s brand identity – fun, cool & bold! We used the characters on the Soda Folk cans to play a part in telling the story and release key pieces of information. Our designers did a fantastic job in accentuating the key aspects of the launch and cleverly putting these at the forefront of the design – e.g. the brand new 4-packs!

Get in touch to find out how we can make a huge impact for your brand.