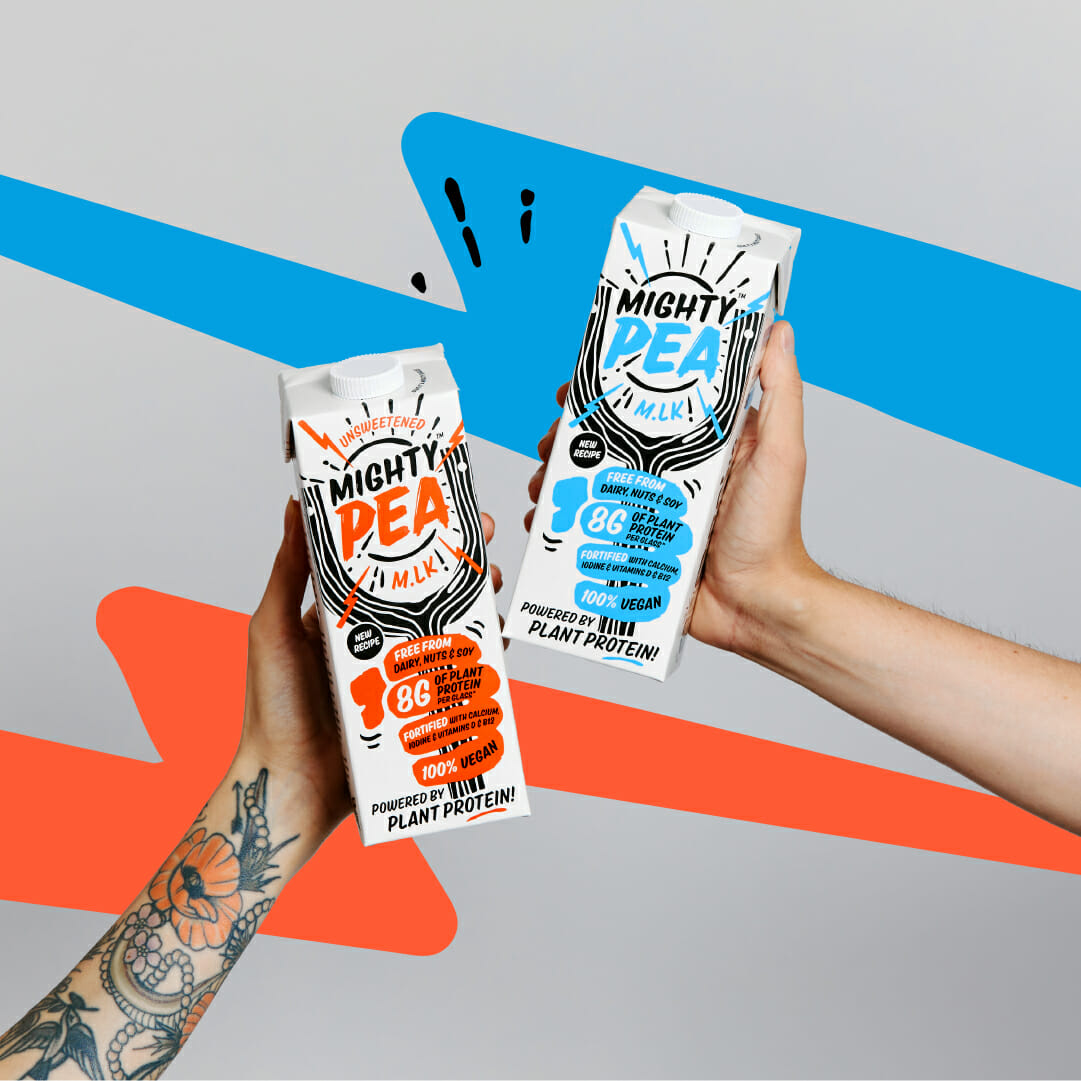 How we helped Mighty Pea make its marketing that much Mightier

By Jonny CorrallOctober 2, 2020No Comments

Since we started working with local Leeds lads Tom and Nick Watkins who founded what was ‘The Mighty Society’, we’ve helped them overfund a successful crowdfunding campaign in less than a week, roll out a total rebrand (including a new brand name) as well as multiple new product launches, social campaigns and activations.

Now, we’re not taking credit for the brand’s rip-roaring success, the team at Mighty Pea have been smashing it with an awesome product, an awesome attitude and an awesome work ethic. It just so happens that they also have an awesome eye for agency partners too…

Here are some of the highlights from our journey with these plant-based pea protein pioneers (easy for you to say) so far:

When we first began our partnership with the team, the brand was called the Mighty Society. They weren’t in love with their social media content and wanted to improve it just in time for an incredibly important crowdfunding campaign.

Having successfully run similar campaigns on social media for other brands we knew what needed to be done. Taking their brand assets, a quick photoshoot and some graphic and motion design nouse, we put together a neat Instagram grid that got the job done.

The success of the campaign was almost too quick to follow and our community managers had to be absolutely on it quickly getting up to speed on the brand and the products as well as a fair amount of the investment jargon in order to respond to enquiries about the financials.

Next on the horizon was a Mighty shift for the brand…

Following the success of the Crowdfunding campaign, we helped the Mighty Pea to roll out its much-anticipated rebrand that the team had been working on prior to gaining new investment. We aided them in bringing an all-new tone of voice to the brand to match their new and exciting visual style as well as guiding them on their use of photography too, to best resonate with their target audience and create a fully fledged brand suited to their pioneering, grassroots values that would effectively differentiate them from their main competition.

We delivered creative ways to re-introduce the products to their fans that already know and enjoy the products, whilst elevating the content to excite and entertain new customers who would have never heard of ‘Pea M.lk’ before. We kicked things off with a campaign that explained to consumers that they were indeed looking for Mighty Pea whether they knew it or not…

One thing we brought to the table for Mighty Pea was the photographic skills to bring the products to life not just in a studio or even in next-level reci-peas but in a way to represent the brand as a reflection of people’s lifestyle. Armed with merch we designed, product to shoot and some hand-selected locations we were able to introduce a new photographic style that complemented the independent, Leeds-centric attitude of the brand. 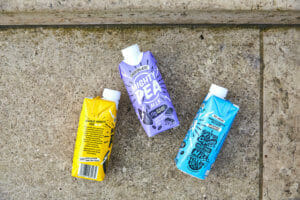 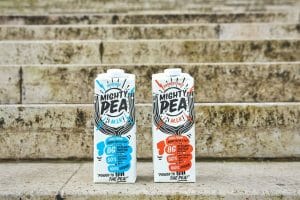 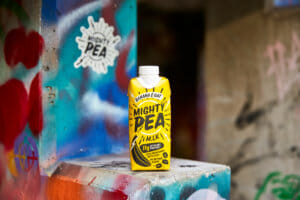 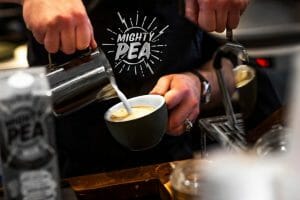 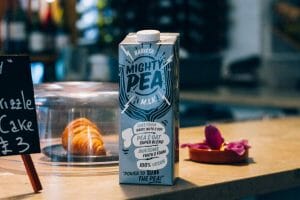 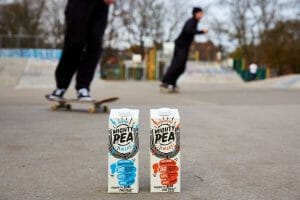 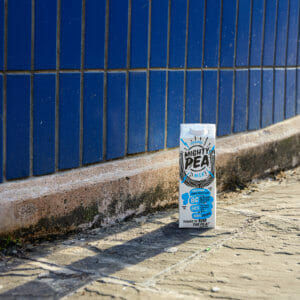 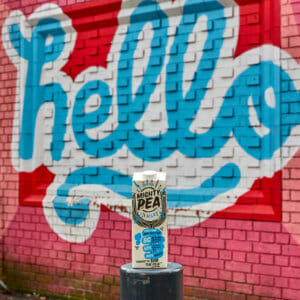 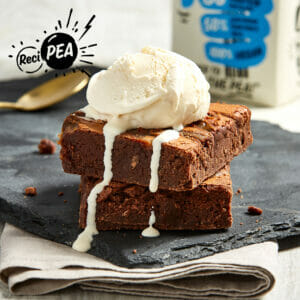 Alongside the rebrand, Mighty Pea had improved recipes for their flagship products as well as three new SKUs in the form of 330ml ready-to-go m.lk flavours. We designed this attention-grabbing 9-grid to tease the launch of the new SKU’s that still makes a Mighty impression on the Mighty Pea Instagram grid.

We complemented this launch grid with a competition to win the new products, awareness ads on Facebook and Instagram with introductory offers to drive first purchases, engaging story content and high-quality photography both in-studio and in lifestyle settings to help entice consumers to give this new product a try when shopping in Sainsbury’s stores around the country.

The campaign theme was to capitalise on the annual influx of newly identified vegans and encourage plant-based people old and new to try Mighty Pea using the campaign tagline: ‘Take a chance on Pea’.

But it wasn’t just some nice motion pieces and a genius campaign tagline that got people trying Mighty Pea in January, ohhhh noooooo.

We went in on Veganuary this year.

From sending out boxes of product to top influencers, sharing next-level recipes with Veganuary goers and big competitions, to launching a new Barista Pea M.lk product, collaborating with coffee shops and getting pea-ple involved in sampling activities all over London – Veganuary 2020 was mightily impactful month for Mighty Pea.

Since January’s success there were big plans in the pipeline that took a back seat due to you-know-what. But that didn’t stop Mighty Pea and ourselves from cranking out top-level content, increasing the brand awareness and clocking big wins for Mighty Pea.

The guys at the helm secured another round of Mighty funding from some of their investors as well as the British Business Bank Future Fund.

Suffice it to say, there are some MIGHTY things on the horizon and we’re absolutely buzzing to be continuing to help the team make their next moves as impactful as possible. Vegan or not – watch this space. 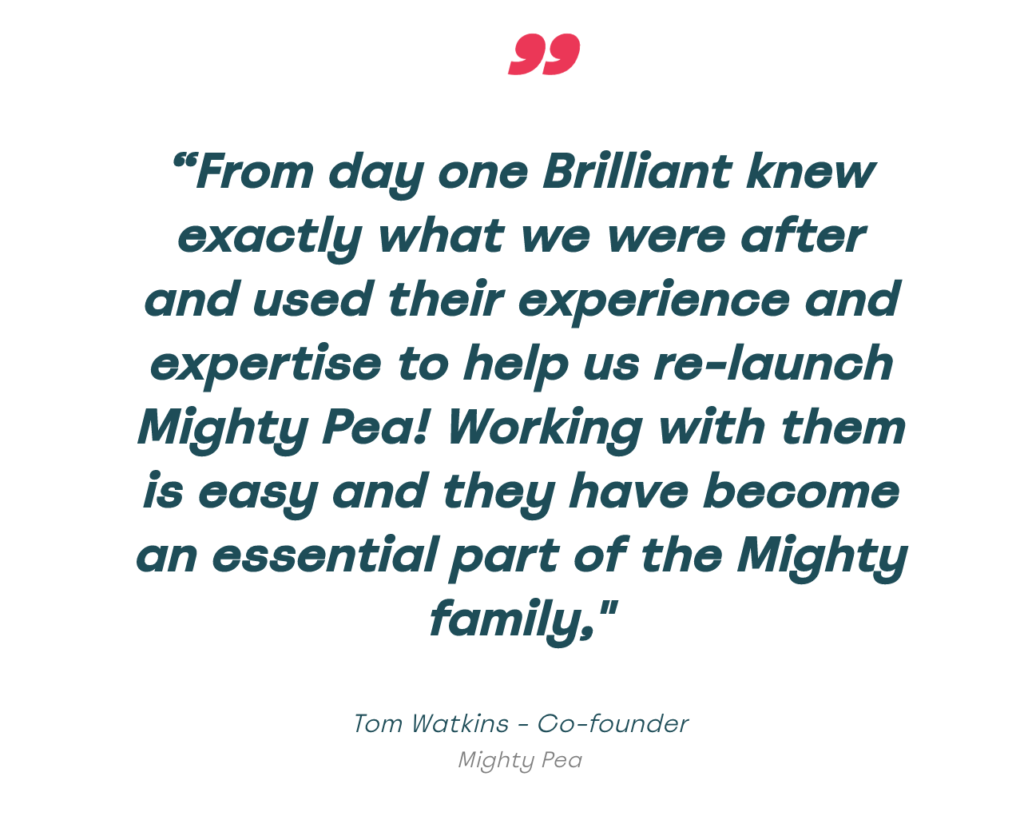