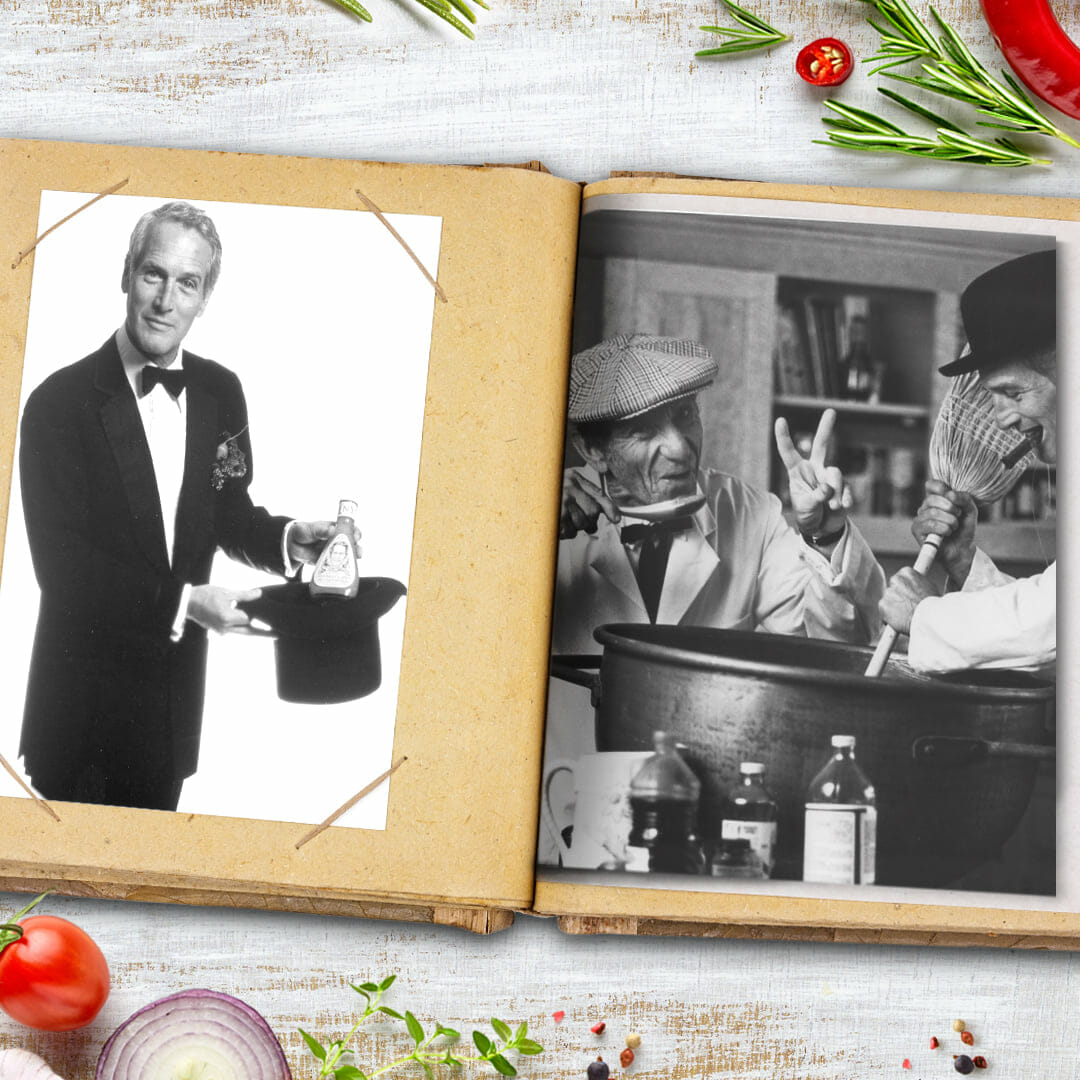 An ode to Paul Newman

By Jonny CorrallJanuary 19, 2020No Comments

Don’t worry, this blog doesn’t include any of my personal poetry. You have to earn the right to read to those powerful rhymes. Entitling this here blog, “An ode to Paul Newman”, simply conveyed my admiration for this newfound personal hero of mine with sufficient levels of gravitas. I apologise for being misleading in any way.

Looking back over 2019, I wanted to spin a little yarn about a certain aspect of the year at Brilliant that I’m particularly proud of. And though there were a number of contenders, I knew immediately that I wanted to make sure as many people as possible are introduced to the wondrous world of Paul Newman. A world I’ve had the pleasure of being engrossed in for a large portion of last year.

Whether or not you know anything about the life of Paul Newman, after reading this here blog you’ll understand why writing for the brand that bears his name, Newman’s Own, has been my 2019 highlight.

This dashingly handsome actor some may recognise from iconic movies like Butch Cassidy and The Sundance Kid, Cool Hand Luke (a personal fave of mine), The Hustler or Road To Perdition.

A brand founded in the United States by Paul Newman back in the 80s that also sell Salad Dressings throughout the UK. Last year at Brilliant, we won the opportunity to take over the social media management and content creation for the UK pages of the brand. We proposed a change to the visual style, food photography and tone of voice on social to make the content more engaging whilst also changing the direction of the messaging. It was through the collaboration with Newman’s Own I began to learn about the great man himself. Before long I internally confirmed him as a new personal hero.

It’s necessary to begin by explaining that whenever we start working with any new client it’s always an incredibly exciting affair. As a copywriter, there’s the buzz of getting one’s teeth into a new tone of voice, which brings with it the metaphorical hunger for eating up as much information about the brand as possible, as well as literal drooling over the opportunity to sample new foodstuffs (obviously you can’t write about the nuances of flavour combinations and tantalising textures without savouring the stuff yourself, can you?… No, you certainly can’t).

All this was certainly true for Newman’s Own, especially in regard to the tone of voice (which we’ll get to in a minute). On top of this usual excitement, however, there were a few bonus aspects that combined to form a quite magical mix that makes working on Newman’s Own to this day something more special. And these are:

1.The Team – everyone we work with at Newman’s Own is a joy to work with.

2. The Man Himself – with a quirky character, an incredible sense of humour and kind-heartedness in spades, he was the sort of celebrity you never think Hollywood would be able to create.

3. The Good Deeds – the brand since the first year of operation and still to this day gives all profits to charities that do amazing work, particularly for children. The better we do in driving a commercial impact, the more money goes to helping people in need all over the UK and the world. There’s nothing much more motivating than that.

We started working with Newman’s Own because we’ve already built a great working relationship with the parent company that makes the delicious salad dressings in the UK – The English Provender Company. Having already worked closely with their team on other brands Very Lazy (chopped garlic gods), English Provender (chutney champions) and Ravish (relish royalty) we’ve cultivated an intensely amiable professional relationship. They’re an incredibly enthusiastic team, all of whom are highly knowledgeable and adept at what they do – in short, they’re absolute pros. They’re and an absolute joy to collaborate with on all of these brands and make the whole process of content creation one to be relished (pun intended).

So, to learn we were going to work with these guys on another brand… big smiles in the Brilliant offices from day one.

Now we get into the wonderful world Paul Newman a.k.a my hero.

One of my first tasks when starting out with a new brand is to establish the tone of voice whether that’s from scratch, developing a previous tone that isn’t quite working or making a u-turn due to a re-brand. For Newman’s Own it started out as a developmental exercise that quickly turned into a whole new character.

The team at Newman’s Own felt the TOV wasn’t quite in line with the brand and were very keen for us to look into a refreshed tone of voice. The first port of call is, as always, research. Which means:

Bringing out the personality of Paul Newman

Having delved into the nitty-gritty of the brand and the products we were working with, the next stage is to take all that knowledge and apply it to the tone. One of the first activities we do at Brilliant is to think about the personality of the brand. That is, thinking about the brand in personified terms. Usually, that’s a little bit abstract, you take all the elements of the brand we’ve been looking at in our research stage and convert them in a person’s attributes and characteristics.

Newman’s Own, however, was a little different. It already had one. It has a personality, a face, a colourful character at the epicentre of the brand – Paul Newman. But the essence of the founder was entirely missing from the tone of voice.

The content was written in a youthful, contemporary way – which many agencies and brands revert to when creating content for social media – but the people engaging with the content were from an older generation, predominantly those who were simply fans of Paul Newman the actor. It lacked the whimsy, the theatre and the voice of Paul Newman, as well as did little to tell the brand story nor communicate the main value proposition of the products. All of this needed rectification.

Having established what was missing and where Newman’s Own sat in the category, the next move was to look into the character and personality of the very man whose face is on every bottle and who eponymously founded the brand. Though I was excited to learn more about the star of Cool Hand Luke (again, a personal fave flick of mine) I was not prepared to discover a true role model in one of the most famous actors of his generation.

One of the first things I found out about PN was he was not someone to do things by halves. So it rings true that this homage should be equally as thorough. The man went for it, that much is undeniable. Whether that was in his professional life, family life, driving cars (he won professional races whilst still acting earning a class victory in the 1979 24-hour Le Mans race!)  or cooking food, he went all-in and he did it with character, charm, humility and, above all, a sense of humour.

You may think that when an A-list celebrity has their face on the packaging for a product, that it’s just a soulless use of their profile to help sales. Not the case with Newman’s Own. All of the original recipes are his and his own (as the name suggests). He came up with many of these recipes in his dreams – that’s how much Paul Newman loved food.

He was ferociously creating recipes for years, collaborating with his immediate family and travelling the world as an actor imbibing all the culinary customs and wisdom he could. To inform the tone of voice I read a number of the cookbooks he and Newman’s Own released over the years. All are scattered with hilarious anecdotes of Paul and his family going to a restaurant, only for Paul to talk his way into the kitchen, talk food and recipes to the chefs, then demand ingredients in order to make his own salad concoctions that he had been perfecting in private.

The kicker to all these characteristics that really cements Paul Newman as one of the greats, is the altruism that was clearly an innate part of his personality. After founding Newman’s Own, creating all the recipes, building the business with his best friend (A.E. Hotchner) with no real outside help, they grafted and within one year had created an extremely profitable Salad Dressings company. Upon seeing the first year’s profits, he decided then and there to give every single penny of it to charity. 100% of it. The entire sum.

Since that very first year of business, Newman’s Own has applied Paul Newman’s ethos to the business. Every single penny of profit goes straight into helping incredible charities do vital work for people who really need it.

In the US, Paul founded his own charitable organisation called The Hole In The Wall Gang Camp that was the world’s first camp for children with serious illnesses to have fun, be kids and ‘raise a little hell’.

Newman’s grew rapidly in the US, expanding the product range and increasing the ability to drive charitable donations. Then they started to export, selling Newman’s Own Salad Dressings all over the world including the UK. Paul and Hotch knew that in the interest of fairness that wherever people bought the Dressings should benefit from the profits.

In 1999, a similar camp to The Hole in The Wall Gang Camp was founded in the UK  called Over The Wall. It was founded by a man named Joe Woods who wanted to allow children in the UK the same incredible opportunities and followed the blueprint of Paul’s camp. This amazing charity has had close ties to Newman’s Own and is the main charity partner of Newman’s Own UK.

For us as a marketing agency, there aren’t many opportunities to be able to make as much of a tangible difference to people’s lives as with Newman’s Own. Yes, we pride ourselves on creating incredibly engaging, interesting content that adds value to all our brands’ consumers every single day. And we always get a buzz from introducing people to awesome recipes, inspiring them to try incredible new products and simply brightening their days with a little irreverence – we love all that! However, that’s nothing than being able to help incredible charities like Over The Wall provide a safe place for children with serious illnesses to regain some of their childhood or helping Reuben’s Retreat (another incredible charity that supports families with young children who have debilitating illnesses) to build a state-of-the-art swimming pool for the less able-bodied to enjoy swimming in.

When we do our job well for Newman’s Own, more people buy their products and more money goes to charity – which is the main reason that this opportunity has been by far my highlight of 2019.

Here’s to a great 2020 and driving more sales than ever this year!